I made it a full week!
i feel cleaner and like i'm really clearing out a bunch of cobwebs; both physically and mentally with my body running on clean energy. and though i lost different amounts of weight on different days, i netted out by losing a little over one LB a day. (btw's, i don't know why i keep typing LB instead of saying POUND, but in case you are confused, that's what i mean).

i have to say that with the exception of the first 2 days of the cleanse, today has been the most difficult day. it's sunday, and tomorrow i have to go back to 2 full days of just purees (no solid meals :/ ). so, just the thought of that is difficult. then there's the fact that usually on the weekends i will cook or try to make something for dinner for my boyfriend and myself, or us and some friends, just to have a Sunday Dinner/Lunch (it's a British thing).

i was afraid to leave the house for any real social plans, because i didn't feel confident enough around, like, baguettes and jam, or eggs. or way too many glasses of prosecco. so the only thing that i allowed myself to do was to go see Gravity on 3d IMAX at Citywalk. (sidebar: it's a great film, cinematically. some parts i was like ok, srsly? but those parts were still good too. i highly recommend seeing it in IMAX 3d if you can-it was worth it. ps-i do not, nor have i ever, had the desire to travel into space. despite my love of Star Trek and Star Wars.)

we all know what going to the movies is about...snacks that you would never get anywhere else. usually, i opt for nachos and a coke or cheree icee. i don't eat either of these things anywhere other than the movies. so that was quite the hurdle to clear. i knew that i wasn't going to get either of these things today due to the cleanse, so instead i did treat myself to a Coke Zero. mind you, i gave up drinking soda about 6 months ago and basically just drink water, tea and coffee now, so i allotted myself something to feel like i was getting a treat from the concession stand. and i tell ya that coke zero was SWEET. like super sweet! my tastebuds were so shocked by it that i couldn't even finish it.

so i got through the movie, and then got home and had a great meal from my cleanse today. it was a tilapia with a rice concoction and some wilted spinach and then some sort of kraut-esque stuff on top. i ate every single last grain on the plate. i realized that i've also really missed cooking and i've had some organic carrots, broccoli and squash/yams that were about to go bad and my boyfriend basically doesn't eat if i don't cook (it's a compliment, not a mandatory). so i decided that i'd make up a broccoli soup for him using some chicken stock, the carrots, half an onion, some garlic, fresh thyme, and then also made him some mashed yams with rosemary, butter and brown sugar as a side. i can very proudly say that i made it through cooking both of these dishes that took a few steps each with only about 2 tastings...and only of the soup, to make sure the seasonings weren't off (i made him taste the yams and tell me what to add). since i don't use cream in my soups and it's basically a broth with broccoli addded in at the end and pureed, i actually think it was very close to the PureedLove soups that i'm eating, so i didn't feel terrible for tasting 2 teaspoons of the green goodness that i made. and i got to cook, which satiated me for a little while, though now i have cleanup to do and i'm hungry. :/

so that was this weekend. how was yours?
Lastly, for anyone who is interested, here is the actual form that you fill out for the cleanse once you're signed up. you pick from these categories, and i've decided to switch it up for week two...no matter how good a pumpkin or cauliflower soup is, i just cannot eat it for 14 days straight. (variety is the spice of pureed life, amirite?) i had to turn in any changes to my choices by EOD friday, and i opted for asparagus, sweet pea (recommended highly by my co-worker who's done this cleanse), swapped to white bean from the black bean (again, you just can't eat poop-soup for 14 days straight) and got the ginger beet soup. i'm excited to try new variations...i hope i like them! 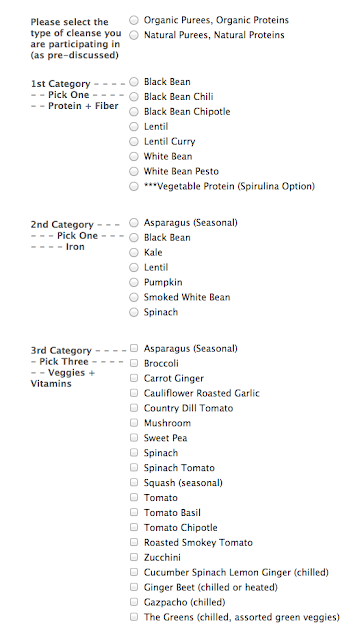